The Image of Divine Mercy 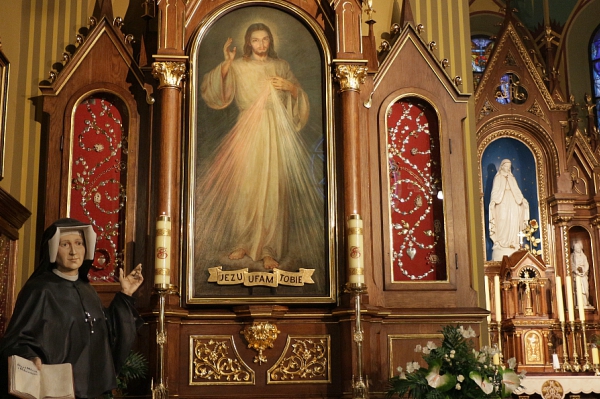 The image of the Merciful Jesus is one of the most recognizable images of Christ in the world. It is unique not only because it is recognized as such, but also because it arose from the recommendation of Jesus himself, who appeared in this form to St. Faustina on February 22, 1931 in the convent of the Sisters of Our Lady of Mercy in Płock. On that occasion, St. Faustina wrote in her Diary: “In the evening, when I was in my cell, I saw the Lord Jesus clothed in a white garment. One hand [was] raised in the gesture of blessing, the other was touching the garment at the breast. From beneath the garment, slightly drawn aside at the breast, there were emanating two large rays, one red, the other pale. (…) After a while, Jesus said to me, paint an image according to the pattern you see, with the signature: Jesus, I trust in You. I desire that this image be venerated, first in your chapel, and [then} throughout the world,” (Diary #47). Christ also made promises to those who would venerate this image: “I promise that the soul that will venerate this image will not perish. I also promise victory over [its] enemies already here on earth, especially at the hour of death. I Myself will defend it as My own glory,’ (Diary #48).

In Vilnius, at the behest of her confessor, St. Faustina asked Jesus what the two rays coming forth from his heart meant. The response came that, “The pale ray stands for the Water which makes souls righteous. The red ray stands for the Blood which is the life of souls These two rays issued forth from the very depths of My tender mercy when My agonized Heart was opened by a lance on the Cross. (…) Happy is the one who will dwell in their shelter, for the just hand of God shall not lay hold of him,” (Diary #299).

The task of painting the image of Merciful Jesus was not easy. When Sister Faustina received permission from her superiors for the painting to be produced and after she found a painter, she was not satisfied with the artist’s work. The Lord Jesus, however, explained to her what ought to be essential in this holy image. In her Diary, she wrote: “Once, when I was visiting the artist [Eugene Kazimirowski] who was painting the image and saw that it was not as beautiful as Jesus is, I felt very sad about it, but I hid this deep in my heart. When we had left the artist’s house, Mother Superior [Irene] stayed in town to attend to some matters while I returned home alone. I went immediately to the chapel and wept a good deal. I said to the Lord, “Who will paint You as beautiful as You are?” Then I heard these words: Not in the beauty of the color, nor of the brush lies the greatness of this image, but in My grace,” (Diary #313).

The image of the Merciful Jesus occupies a central place in our church – the Sanctuary of Divine Mercy. It is placed in the sanctuary above the Tabernacle. Every day the faithful look at the face of the Merciful Lord, participating in the liturgy and praying the Chaplet of Divine Mercy before every Holy Mass. The words on the image, Jesus I trust in You, express great trust in Jesus, and are uttered by the faithful many times personally or as a community, as well as in various hymns which give praise and honour to the Merciful Jesus.